Roeux British Cemetery is the final resting place of 350 young men. Before they were laid to rest it was possible to identify 319. The other 31 are known only ‘unto god’. The site of the cemetery was quite possibly a field dressing station – where medical staff attended to the immediate needs of the injured and did what they could to ease the pain of the dying. Alongside the large cemeteries in which the remains of tens of thousands of soldiers are interred, there are hundreds of similar places dotted everywhere across the landscape of southern Belgium and northern France – a legacy to the 1914-18 ‘Great War’. 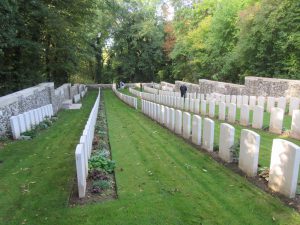 Today, it’s a tranquil place. Compact. Immaculate. Nestling on a gentle slope and shaded in a spinney; nature softening the scars of the trenches, the bombs, the boots and the battle. Indeed, it’s almost impossible to imagine how different it must have been a hundred years ago.

I visited the cemetery this week. Turns out that one of those buried there is a relative from within my extended family. He died in combat on Friday 27 April 1917.

It’s a deeply and profoundly affecting experience. The force of the emotional impact is overwhelming. Like the waxing tide in its relentless march up a beach, it’s unstoppable.

Above all, it’s an experience that sets things into context. I’m passionate about what I do. I do it because I hope to make a difference. We all do, don’t we? But as I stood in that serene, peaceful, sorrowful place, I couldn’t help but stop and think about how fortunate I am for the trivial things that keep me awake at night.

The Commonwealth War Graves Commission (CWGC) cares for the graves of almost 1.7m service men and women of the Commonwealth forces at more than 23,000 locations around the world. The attention they pay to their work is outstanding and I am grateful to them for the love, care and respect they so clearly show to every single grave in those locations.

One thought on “Roeux British Cemetery”